It was a hectic month (luckily Sinterklaas was already celebrated with the family in November):

And then with my parents and sister to Schiphol! Well on time because nowadays you don’t know how long you have to wait 😉 Fortunately everything went smoothly and I flew from Schiphol to Tenerife. There I was met by someone from a travel organization who picks up the travellers on their way to Mercy Ships (and also take them from the ship upon departure). Hop into the taxi (the area gave a real holiday feeling!) and before I knew it I saw the Global Mercy in the distance and also the Africa Mercy. That ship has also arrived in Tenerife and will undergo major maintenance in the coming period. This means that there is extra pressure on the Global Mercy because the crew of the Africa Mercy has been added to that of the Global Mercy.

On arrival I was welcomed by a Ghurka (the Ghurkas provide security for the ship). I registered at the reception, a photo was taken and I immediately received a card (which takes me to my bedroom). After a stopover at my bedroom (which I share with a nurse), I immediately got a tour of the ship. There are 12 decks, and we went through all but 2 decks. It was big and overwhelming. I immediately received

a lot of information from my colleague who is also in the Hospitality team. After more than an hour I felt dizzy 😉

Then I unpacked everything and made myself at home. What was so nice and thoughtful were all the signs of welcome. Something had been taped to the door, I had received delicious cookies and my roommate had also left a message. I had taken some received cards to Tenerife and hung them up right away. Interesting fact: the walls are magnetic, so the cards stay in place with my magnets! 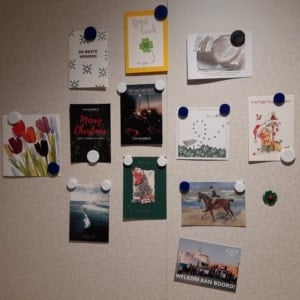 For this morning I had agreed that I would have breakfast with a colleague, around 7.30 am (at 8 am my “New Crew Orientation” – NCO started). However, my phone had jumped back to Dutch time, so I was ready at 6.30 am, lol.

The NCO was very instructive. In particular the safety part, where we were shown around the ship and we were given all kinds of explanations about various symbols, the weekly exercises / assembly points, what to do in the event of a man overboard, the importance of communication, etc.

In the afternoon I accompanied the hospitality team (at the moment there are four of us) and got a brief insight into what part of the work entails. There is a constant flow of new volunteers, guests and departing persons. This means that bedrooms have to be prepared almost daily. It’s just a hotel for that matter! In this position, it seems that you take approximately 10,000 steps in a day and walk many stairs. I think I’ll come back a lot fitter ;-), whether I lose a few kilos remains to be seen – the food is excellent!

In the evening, as part of the Christmas period, we also had a Christmas Carol service (open air singing service). I enjoyed standing on the other side now and singing various songs that I had played the Sunday before! The service was on deck 12, normally closed off and used as a helicopter deck. It was painted the day before so we weren’t allowed to walk in certain spots. I have a hunch that things didn’t always go well in the dark….

The next few days we have Ship holidays. Several people are then free, except for a number of essential functions, such as those who prepare the food 😉 However, to give them some time off, we get the opportunity to make packed lunches at breakfast. This is also the case during the weekend. So I don’t have to get to work for the next few days, I will formally start next Tuesday. And that’s nice!

See you next time 🙂